Joke van Leeuwen (1952) was born in The Hague, the Netherlands. When she was 13 years old, her family moved to Brussels, Belgium. She studied at a Flemish highschool, the Royal Academy of Arts in Antwerp, the Sint Lucas Institute in Brussels (graphic arts) and the Vrije Universiteit in Brussels (history).

In 1978 she published her first children’s book and received awards at the Camarettenfestival for her performance for adults.

She writes for adults and for children. She has written and drawn many children’s books, which have been translated into many languages.  Especially her book ‘Eep!’ has been translated worldwide. She also received many awards, among which the Theo Thijssen Award and the German James Krüss Award for her works for children, and the Constantijn Huygens Award and the Golden Goose Feather, for her works for adults as well. 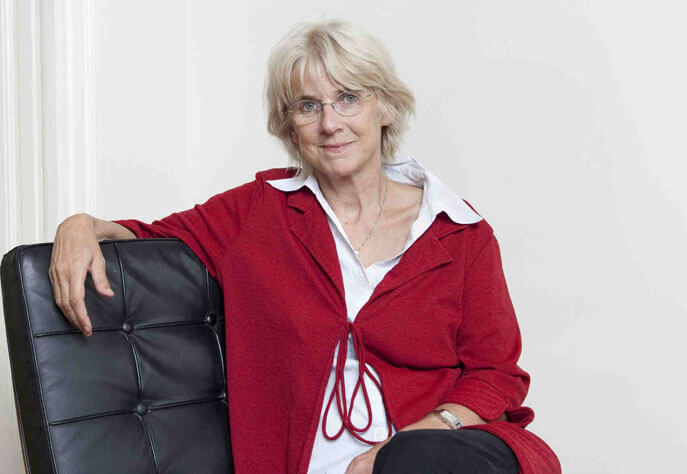 For adults she writes novels and poetry. For her novel ‘Feest van het begin’ (Celebration of the beginning, 2012) she received the AKO Literature Award, and her novel ‘De onervarenen’ (A song of inexperience,2015) was on the short list of the Libris Literature Award. Her latest novel ‘Hier’ (Here, 2018) received five star reviews. In March 2021 her new novel has been published, ‘Mijn leven als mens’ (My life as a human being). In February 2022 her book for young people and adults ‘Beginnelingen, de jonge jaren van 24 opmerkelijke mensen uit de hele wereld’ (Beginners, the early years of 24 remarkable people from the whole world) has been published.

For her poetry she received the C. Buddingh’Award, the Poetry Day Award, and nominations for the VSB Poetry Award and the Herman de Coninck Award.

She also exposed her drawings and paintings, wrote for theatre, made and played her own performances, and two children’s programs for the Flemish television. In 2008/2009 she was city poet of Antwerp. During the commemoration of 1815-1830 she wrote poetry as a ‘Nederbelg’, a mixture of Dutch and Belgian influences.

Among other recognitions are the Honour List of the Padua University, Ibby Honour List, and Astrid Lindgren Memorial Award nominations.

Joke van Leeuwen lives in Antwerp. She can express herself in Dutch, English, French and German (and at a lower level Spanish).